Aya Kurihara is the tritagonist of the Complex Age manga. Aya is a novice cosplayer with an intense desire to become a perfect cosplayer like her idol, Nagisa. Though she has much to learn about cosplaying, she is more than willing to push through with all of it for her ethereal end goals.

Aya is bubbly and boisterous. She is also very timid, but is drawn to Tsundere/Kuudere characters that have haughty attitudes.

Round cheeks, petite figure and short height make cosplaying her favorite type of anime characters a challenge. She often has to stuff her bra or wear heels to appear more mature. 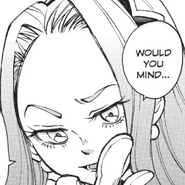 Aya cosplaying as Lilly from Magical Riding Hood Ururu
Add a photo to this gallery
Retrieved from "https://complexage.fandom.com/wiki/Aya_Kurihara?oldid=347"
Community content is available under CC-BY-SA unless otherwise noted.