Kimiko Baba is the deuteragonist of the Complex Age manga. A friend of Nagisa, Kimiko also cosplays, but with a fairly relaxed attitude (in sharp contrast to Nagisa's perfectionism). Though Kimiko does appreciate quality and goes to great lengths to help Nagisa, herself, and others to get good cosplaying outfits, she also appreciates the full gamut of cosplayers, not just the hardcore ones.

Generally nice enough, but can get fed up with people who presume themselves above others. Kimiko is a true friend to Nagisa and deals with tough situations deftly. She is unafraid to call Nagisa out, while also recognizing Nagisa is struggling and reassuring her of her own capabilities.

Short in stature, Kimiko is often in heels to compensate. Her hair reaches just below her ears with bangs that frame her entire face. Her eyes are kind with a flat waterline and thick lashes on her upper lid. She pulls off tomboyish-childish characters really well in cosplay. However, she has a variety of types of characters she likes to cosplay, but all of them require heels. 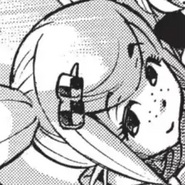 Kimiko cosplaying as Kokemomo from Magical Riding Hood Ururu
Add a photo to this gallery
Retrieved from "https://complexage.fandom.com/wiki/Kimiko_Baba?oldid=344"
Community content is available under CC-BY-SA unless otherwise noted.