Nagisa Katura is the protagonist of the Complex Age manga. For Nagisa, cosplaying is her life. It's a job to be worked at and be done perfectly, not something for amateurs who don't take it as seriously at it deserves. Unfortunately for Nagisa, not only do others not treat it this way and look down on her for doing so, but this cosplay obsession isn't even her actual job nor her apparent real life. As the story goes on, she is forced to balance her passion with her more normal constraints, such as her increasing age, her job's requirements, and so on.

At the age of 26, one would think she would be mature. Nagisa developed a hyper-obsession with Ururu, a fictional anime girl, and has dedicated herself to becoming that character.

When she first saw Ururu, she considered Ururu to be everything she isn't. On that basis, her confidence is predispositioned to being weak.

She seeks validation for her hard work through others and the internet. Though she is an excellent Ururu and receives a lot of positive attention for it, it only takes one negative comment to tear her down.

She is easily threatened by smaller, cute girls and other cosplayers. She loathes cosplayers who are not on the same skill level as her. She struggles suppressing her harsh criticism and attitude to others. It's evident that she doesn't want to be this way, though.

Gradually, she becomes more welcoming to new cosplayers and people with other talents. She still struggles with insecurity, but is more concerned with how much time she has left to cosplay.

She often receives comments on how wonderful her figure is or how long her legs are. Her eyes are an oval shape with thick lashes and big irises. Her right eye has a beauty mark below it. 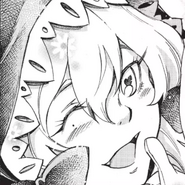 Nagisa cosplaying as Ururu from Magical Riding Hood Ururu
Add a photo to this gallery
Retrieved from "https://complexage.fandom.com/wiki/Nagisa_Katura?oldid=345"
Community content is available under CC-BY-SA unless otherwise noted.